Last week, as planned, was quite short but very interesting.

Development of the reactive prototype at some moment hit a complexity point where a dead-simple hacky approach could no longer work. Although go language (with its simple flavor of behavior composition) allowed to go pretty far on that route, in order to move forward, I had to bite the bullet and refactor things from a big ball of mud to a collection of components.

That’s when I realized that I already enjoy coding in golang as much as I enjoyed working with C# in Visual Studio with ReSharper after 8 years of practice in it. 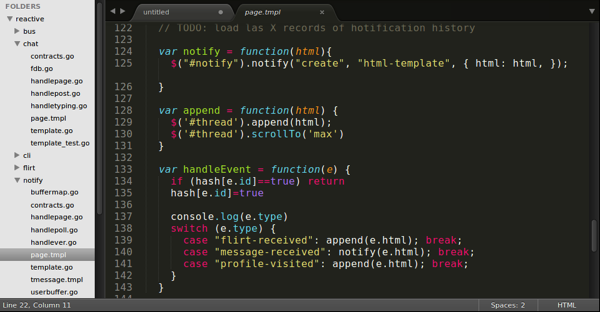 After that refactoring I was able to move forward with the domain exploration (in case of HappyPancake domain includes both the social networking and technical peculiarities of developing reactive application at a social scale).

One of the interesting aspects of the development was the interplay between:

At this point, I think, we have a pretty good understanding of the domain around messaging and notification feeds. We have: 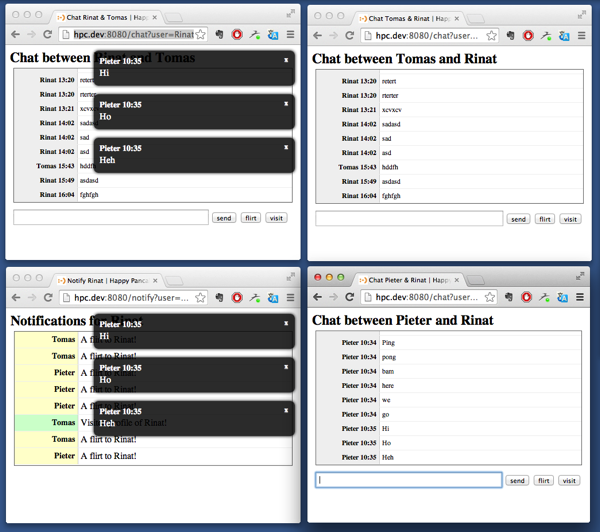 Meanwhile, Pieter was working on the other half of HappyPancake - understanding and developing interactions around document based flows in the social network - registration, logins, profile editing and reviewing. All with PJAX and basic http handlers (we discarded Revel, since it does too much CPU-intensive magic).

Tomas, as usually, focused on backing up our development. He took care of the v1 maintenance, campaigns and also invested in capturing use cases for us to move forward.

It was extremely interesting to sync up with Tomas and Pieter occasionally, sharing concerns and discoveries along the road. It felt like getting an instantaneous deeper insight into the problem we are trying to tackle here.

Another really awesome part of the last week was about gradual transition from purely technical use cases (consistency, availability and latency issues) to practical use cases that matter to our users (flirts, messages, visits etc). Although technology is an important part of HappyPancake, users are the domain that we ultimately trying to understand and master.

The upcoming week will be a bit longer than the previous for me, but still only 4 days (May 9th is another holiday).

We plan to start my prototype into Pieter’s prototype, while moving forward and adding more use cases. I hope to also move forward with newsfeeds. They require a balance between consistency and availability that is different from notifications and chat messages (more like the Instagram news feeds).