Telemetry originates from Greek roots meaning "remote measurements". When applied to software development, it gives a real-time insight into a running software.

Linux world has a few handy (and battle-tested) tools to help with these problems. Installing and configuring them can be a task ranging from "it takes just an apt-get" to "it requires a day of admin work".

My preferred approach to logging can be described as: write structured text logs and ship them to an ElasticSearch cluster with Kibana dashboards.

Let's discuss that in more detail.

Structured logging libraries so far worked the best (for me) for capturing logs in applications. They allow to:

Serilog is a logging library by Nicholas Blumhardt (also famous for Autofac.NET). It preserves the structure of events it writes, making it well-fitted for feeding that data to ElasticSearch.

Elastic Search is an open-source server for searching and analyzing data in real-time. There are a lot of ways to ship the data to it from different machines. For example, you can use Logstash in Java world or Serilog with ElasticSearch sink in .NET.

There are a lot of materials written about ElasticSearch. Here is a feature list.

Kibana is a nice Web Interface for exploring and visualizing the data. It plugs into the ElasticSearch and just works. 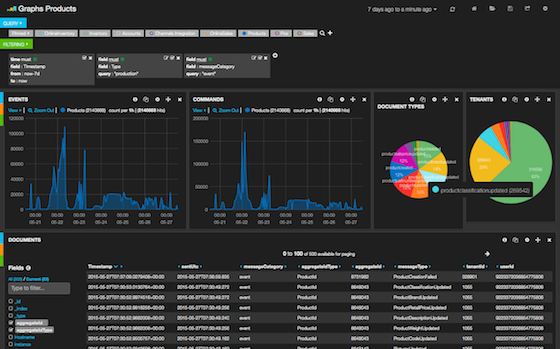 Application metrics are usually real-time events that fall into the following categories:

These metrics are frequently represented as tiny events with a complex name (API_v1.PROD.Worker_IN_0.azure.queues.sales.count) and a numeric value.

StatsdClient is one of the libraries for capturing metrics in a .NET application.

Metrics can be shipped from a running process via a UDP broadcast to a locally running aggregator daemon. This daemon will then send them to a metrics storage back-end.

Carbon (storage), Graphite (robust but ancient Web UI) and Grafana (front-end for Graphite front-end) are frequently used to store these performance metrics, explore and build dashboards for them. 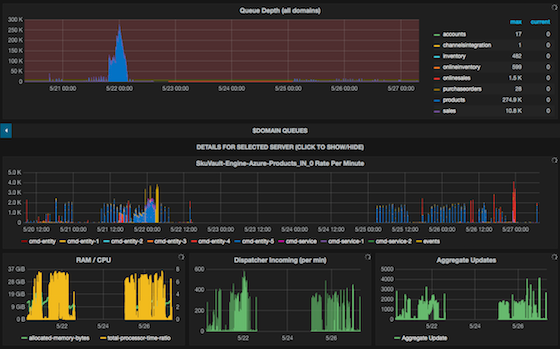 Graphite can be a pain to setup, so reusing some existing docker container is recommended.

InfluxDB is more robust alternative to Carbon/Graphite (and Grafana works with it), however sending data to it would require rethinking metrics and rewriting the dashboards.

Automated alerts could be setup, once you have application metrics available. For example you could get emails: