I'm still in the process of learning Domain-Driven Design for CQRS coupled with the Event Sourcing.

One of the things I really like about this approach is the ability to thoroughly and reliably unit test even complex domains. As I've tried yesterday in a learning project, a unit test is basically a simple scenario (txt) file that looks like this:

Or if we are expecting an exception:

Basically each unit test ensures that:

These tests are generated by hand (or from the UI or by recording sessions). You just drop them into the folder of your liking inside the test project (this feels like a reduced dev friction as compared to .NET unit tests). There is even no need to launch Visual Studio and add item references. Build will pick scenarios up automagically via the means of of slightly modified project file:

The output will be a nice Project.Tests.Scenarios.dll that contains all the scenarios as embedded resources. Afterwards, you just need to generate tests (one test for each resource). In NUnit you can do something like this (note how Rx makes things so elegantly simple):

TestCaseSource is NUnit native attribute that generates a unit test for each argument that is passed by the referenced collection factory. The latter could look like: 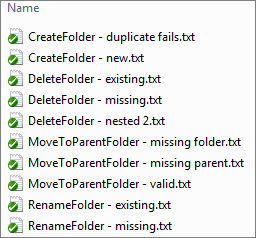 Would be translated into NUnit test suite like this: 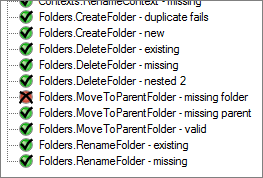 I'm still not sure if it is possible to affect NUnit tree structure via the attributes, making it more sensible and clean.

All in all this experience is just based on my attempt to learn CQRS/DDD/ES by the means of running a learning project. You need to stay ahead of the current development requirements in a fast-paced environment like Lokad. Yet so far this scenario-based approach (inspired by using Fiddler recording sessions to unit test REST APIs) seems to look quite good, despite the fact that it was formalized and implemented just last night.

Yet I'm really interested if there are any ways to improve the experience (esp. reducing friction-per test). So here are a few questions to the readers:

PS: You can check out xLim 4: CQRS in Cloud series for any latest materials on this topic.